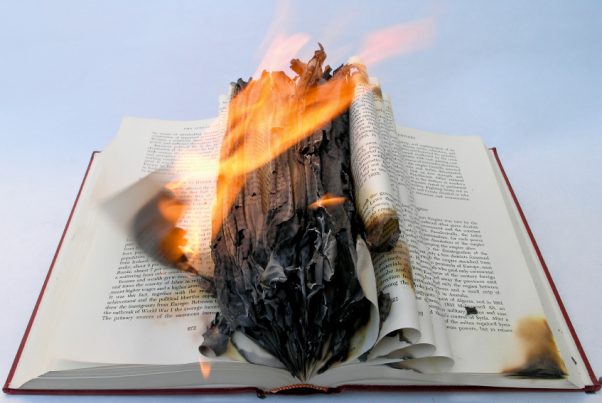 How do you burn books in 2017 without using fire? You simply remove them from the internet. Most Americans use search engines without ever thinking that there could be massive filters on the information. As of late, Google proved that fact and has black-holed thousands of articles about natural cures for preventable diseases, dangerous chemicals in vaccines, and of course, inside information about the corrupt US government that Trump is trying to dismantle and replace. Book burning in 2017 is as easy as pushing a button, and Google has done exactly that – they deleted everything that has to do with our website, Natural News.

Google working with shadow government to take down Trump

When the Clinton Crime Family got caught red-handed committing acts of treason, over and over before the election, Natural News was right there to expose them. When the Democratic National Committee planned violence at Trump rallies and bussed illegal aliens across state lines to vote multiple times, Natural News shared the Veritas videos with at least 7 million people.

When all the national polls, news programs, and talk shows said Hillary Clinton had a 95% chance of winning the election, Mike Adams called their bluff. So now, something wicked this way comes, and the sinister Obama/Clinton/Globalist regimes aren’t sitting idle. Whatever’s coming, they don’t want alternative media spreading the word to tens of millions of people when the scripted troll networks run their narrative. In some ways, Google’s censorship of real news and truth media smacks of Nazi Germany. Let’s take a quick look back at exactly how.

In a prelude to the horrific future that was on the horizon, Joseph Goebbels led a massive book-burning act, complete with the incantation of Nazi songs and a propaganda speech. Students from Wilhelm Humboldt University took thousands of books from the library, in an effort to denounce selected authors, and tossed them on a massive bonfire. This was the beginning of the great purge of anything and anyone that opposed the insane Nazi regime. As the saying goes, “Where one burns books, one will soon burn people.” It was known in America as the “Holocaust of Books.” Then, sure enough, millions of innocent people were executed in the gas chambers of the Holocaust (or simply shot twice in the head) and then burned, erasing legacies of family histories and entire generations of Jews, among many others.

Google’s “Bibliocaust” is under way in America

Have no doubt whatsoever in your mind; the Nazis deliberately and systematically brainwashed the German people into supporting their genocidal war. The book-burning bonfires in Berlin in 1933 were not some rogue protestors paid by George Soros to disrupt some political rally or town hall meeting like we see today. The Nazi regime, acting via its Minister of Propaganda, was teaching its followers that their salvation lies in violence. Google’s deleting of 140,000 Natural News articles is a violent act perpetrated in the face of our freedom of speech and press. Thousands of websites that support President Donald Trump and the Constitution have also been wiped from history, simply because the people who run Google also support the globalists who lost the US election three months ago. From Bill Gates to George Soros (a Nazi collaborator by the way), and from Monsanto to the Clinton Foundation, if “Hitlery Clinton” had become POTUS, we may have been just months away from another Holocaust. So what’s coming next from the shadow government that lurks behind closed doors — the one that influenced Google to “burn” thousands of books, articles, and the truth that was exposing the “New World Order?” Only time will tell.

It’s not just political. Google is trying to silence natural health. Google has also banned nearly all nutritional ads. Part of Hitler’s powerful regime was fueled by his “Big Pharma” called I.G. Farben, a conglomerate of chemical companies that helped him drug and gas people to death. Today, that same Big Pharma uses chemotherapy, toxic vaccines, prescription drugs and fluoridated tap water to keep Americans weak, dumbed-down, sick and in “need” of Big Government. You see all the connections?